Protein aggregation and subvisible particle analysis is a breeze with Micro-Flow Imaging™ (MFI). Not only is MFI more sensitive than traditional particle detection techniques, it also lets you discriminate between translucent protein aggregates and other particulates. MFI takes images of the particles in your sample, giving you more data beyond just size and count. With 10 different types of morphological data at your disposal, you'll know exactly what your particles are—silicone oil, air bubble, protein aggregate, or something else. You can't do that with standard light obscuration!

How Is MFI Better Than Light Obscuration For Measuring Protein Aggregates?

Reduce Recall Risk Due to Particulate Matter Contamination With MFI

Particulate matter contamination was the second highest cause of recall by the FDA in 2016. Current contamination detection methods, like Light Obscuration (LO), are limited in their ability to detect all particulate matter. Why? Protein aggregates are often highly translucent and therefore missed by compendial methods. Work done by the National Institute of Standards and Technology has shown that Light Obscuration is less sensitive to particles whose refractive index closely matches the surrounding matrix. This leads to both undercounting and under-sizing of protein aggregates.

Micro-Flow Imaging combines the direct imaging capabilities of digital microscopy with the precise control of microfluidics. Therefore, you get a complete image of what passes through the flow cell. Translucent protein aggregates that would be missed by LO are caught by MFI. From those images, morphology is derived which can then be used to differentiate particle populations within the sample. With a more sensitive detection method and the ability to separate protein from non-protein, MFI gives you the most complete profile of particles in your sample.

Figure 2 (Right). MFI’s high sensitivity allows it to detect translucent particles, like protein aggregates, that are invisible to traditional methods like Light Obscuration. Its image-based approach allows MFI to distinguish between different particle populations within a sample, including protein aggregates, silicon oil and other contaminants. 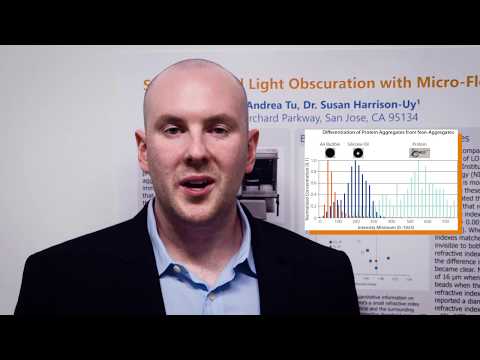 
Hi, my name is Colin Merrifield with ProteinSimple, and it's my pleasure to introduce you to micro-flow imaging. Micro-flow imaging or (MFI) was developed to measure and characterize sub-visible particles in pharmaceutical products.

Sub-visible particles are generally defined as being between one and 100 microns, and they are designated as a critical quality attribute by the FDA and the USP. The reason for this designation is because of the potential health threat that they present to patients who are receiving that therapeutic.


The original research into sub-visible particles in pharmaceutical products was focused on the risk of capillary occlusion which could be caused by inorganic materials that had been introduced into the pharmaceuticals during the manufacturing process. These could include rubber, glass, or metal.

To combat this, the technique of light obscuration was introduced to help measure and control these particles. Modern biopharmaceuticals present unique health risks such as immunogenic reactions, and they also have unique challenges when it comes to characterizing the sub-visible particles within them. These are inadequately addressed by light observation.

This poster (discussed in the video) will be focused on demonstrating how MFI provides some of the crucial information that light obscuration misses. To begin, I'd like to talk a little bit about how MFI works.


MFI is based on the concept of bright field microscopy. On one side of the sample, we have a light source which illuminates the sample. Then on the other side, we have our optics which focus a camera which then images the samples that pass by. Now in between that, we have the flow cell. The flow cell is crucial for guiding the path of the sample past the optics.

This provides two essential things. First, it makes sure that we image as much of the sample as possible, so MFI is able to image up to 85 percent of the sample that is passed through. This is very important for ensuring that the results that you get from the analysis are statistically significant. If you're doing something like final product quality control (QC), you're able to analyze the vast majority of the sample that you recover from that specific vile or syringe.

The other thing that the flow cell insures is that all the sample passes through the correct focal depth of the system so any optical setup that's under magnification has a focal plane. It's very important that all the particles are measured within the same focal plane to ensure that the measurements are accurate, precise, and you can fairly compare particles that are measured in the same sample.

Advantages of MFI Over Light Obscuration


One of the main advantages that MFI provides over light obscuration is a more sensitive detection threshold. In this study done by the National Institute of Standards and Technology, polystyrene beads were measured by both MFI and light obscuration in matrices of varying refractive index.

In this chart, you can see the series of measurements taken with MFI represented in the red series, and you can see the measurements taken with light observation as represented by the blue series. If you turn your eyes to the dotted line which vertically intersects the chart, this is the point at which the refractive index of the beads and the matrix is perfectly matched. It is the point where the beads have become almost optically invisible to the two systems.

As you move left from this dotted line, you begin to see the measurements taken by the two technologies diverge. At only a four percent difference in refractive index between the beads and the matrix, MFI is already measuring within 10 percent of the nominal diameter of the beads. The light obscuration measurements are only coming in at about 25 percent of the total diameter of those beads.

MFI is measuring about 18 microns compared to the nominal diameter of 20 microns, and light obscuration is only measuring 5 microns under those same conditions. This ability to measure particles with low optical contrast to their matrix is especially important for evaluating biopharmaceuticals.

The samples analyzed were solutions of monoclonal antibody which were subjected to two different types of stress either shaking or cavitation (these are known stressors which cause proteins to aggregate). The data is represented in four different size bits including particles greater than 2 microns, 5 microns, 10 microns, and 25 microns.

You can see that for both the conditions and at all size bits, MFI measures far more particles than light operation does. In fact, it measures up to 10 times more particles for some of the size bits. Because of its enhanced ability to see protein aggregates, MFI is commonly employed as a formulation development tool, a process development tool, and is heavily involved in final product QC.

The three different particle types are protein aggregates, silicon oil drops, and air bubbles. The morphological parameter that we're leveraging is the intensity minimum. This is a measurement of how translucent or opaque that particle is. You can see on the far right of the chart the protein aggregate which is highly translucent it has a lot of light that transmits through it - this spore is very highly defined in terms of intensity minimum. The silicon oil drop (with its dark outline and it's bright Center) has a slightly lower score. Then, the highly opaque air bubble scores very low for intensity.


The combination of sensitivity and image-based morphology makes MFI technology and systems an invaluable tool for developing and manufacturing modern biopharmaceutical products. If you're interested in learning more about the MFI instrument, keep reading below and check out all the resources available on the MFI 5000 Instrument.

"MFI technology has allowed us to better understand what conditions promote stability of our therapeutic molecules, which ensures that only world-class medicines are delivered to patients."

"We’re able to do extended analysis with images provided by MFI and then bridge this data with other techniques to identify and rapidly classify particles in solution. This helps our clients understand their products better and ensure they are providing the highest quality product to their patients."
Previous Next
Medimmune Story on MFI
KBI Story on MFI
Request Pricing for MFI