Avi-tag proteins offer the advantage of site-specific biotinylation within the 15 amino acid Avi-tag while leaving the rest of the protein unmodified.
R&D Systems Avi-tag proteins are tested for a consistent and high degree of biotinylation as well as bioactivity to ensure that each protein performs as described with the consistency you expect from us.

Biotinylated proteins can be powerful tools for assessing protein-protein interactions and screening  antibody or small molecule libraries for potential therapeutics. Avi-tag recombinant proteins contain an extra 15 amino acid sequence, the Avi-tag, typically fused to the N- or the C-terminus of protein. This Avi-tag peptide is recognized by BirA ligase which enzymatically attaches a biotin molecule to a single lysine residue within the Avi-tag sequence. As a result, Avi-tag proteins are biotinylated in a site-specific manner, allowing for consistent, uniform protein biotinylation. This provides enhanced control of protein orientation in binding assays, and since the Avi-tag is located on the end of the protein, the effect on the activity of the protein is typically minimal. The result is a biotinylated protein that maintains the same characteristics as the unlabeled protein.

As biotin is a relatively small molecule, it typically does not affect the activity of the protein, but our in-house scientists rigorously test both our amine-labeled and Avi-tag biotinylated proteins to ensure that they exhibit the same level of bioactivity as the unlabeled protein. Additionally, the lot-to-lot consistency of all our proteins are routinely evaluated. Each new lot is tested side-by-side with previous lots and with a master lot, so you don’t have to worry whether your results will be reproducible over time.

Explore our large selection of R&D Systems™ amine-labeled and Avi-tag biotinylated proteins to find the right protein for your assay. 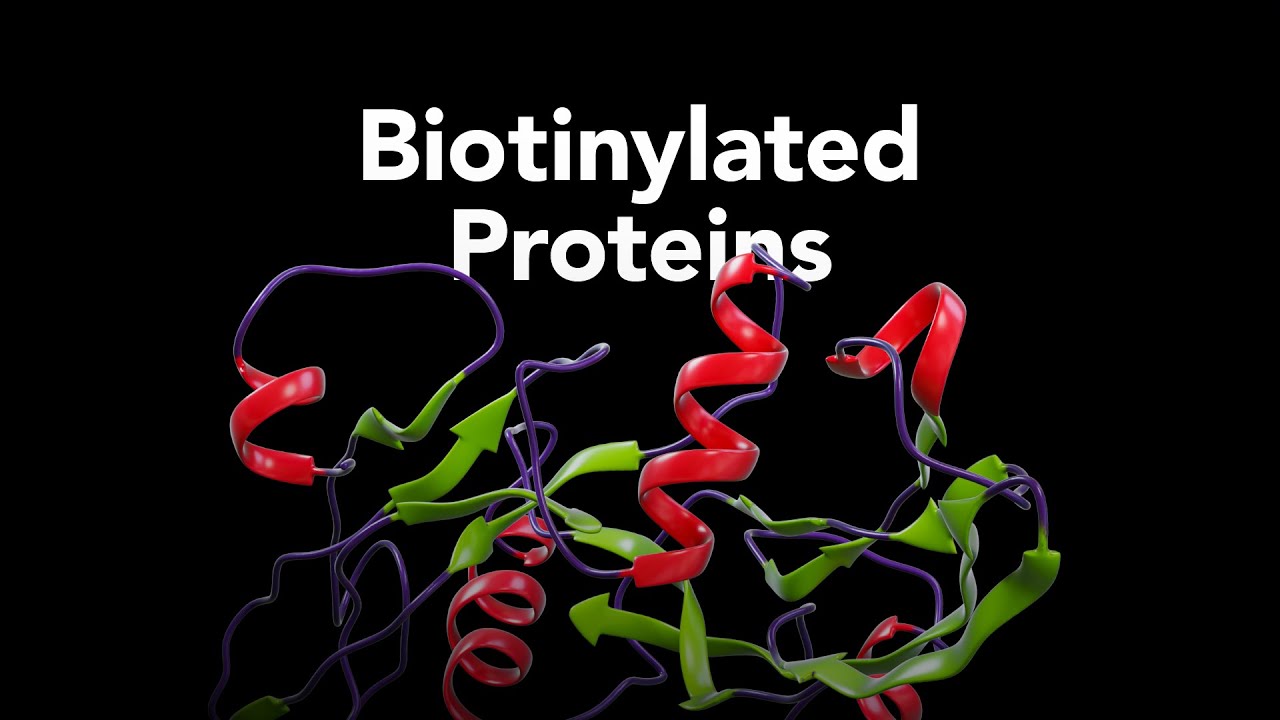 This video describes how R&D Systems amine-labeled and Avi-tag biotinylated recombinant proteins are produced and the advantages associated with either chemical or enzymatic biotinylation.

• Consistent, highly specific labeling. A single biotin molecule is enzymatically added to a lysine residue in the Avi-tag by BirA biotin ligase, resulting in the generation of a homogeneous product.

• Lot-to-lot consistency. Each new lot is tested side-by-side with previous lots and with a master lot, so you don’t have to worry whether your results will be reproducible over time.

• High signal strength. Chemical biotinylation labels the protein on amine groups found in lysine residues throughout the protein and at the N-terminus, resulting in multiple biotins being incorporated per protein.

• Lot-to-lot consistency. Each new lot is tested side-by-side with previous lots and with a master lot, so you don’t have to worry whether your results will be reproducible over time.

Affinity Measurements and Binding Kinetics of the CTLA-4:B7-1 Interaction by Surface Plasmon Resonance. Sensorgram data of captured Avi-tag Biotinylated Recombinant Human CTLA-4 Fc Chimera (R&D Systems, Catalog # AVI7268) binding to Recombinant Human B7-1 Fc Chimera (R&D Systems, Catalog # 10133-B1). Briefly, Avi-tag Biotinylated Recombinant Human CTLA-4 Fc Chimera was captured at a low coupling density to the active flow cell via the Avi-tag biotin. Recombinant Human B7-1 Fc Chimera at a concentration range between 82 pM and 21 nM was flowed over both active and uncoupled reference flow cells at each concentration. Kinetic sensorgrams were fit to a 1:1 binding model to determine the binding kinetics and affinity, with an interaction affinity of KD=0.2511 nM. The corresponding overlaid kinetic fits with the residual plot shown below. The corresponding steady state affinity fit is shown at the bottom. The experiment was performed on a Biacore T200, GE Healthcare.

Immune checkpoint proteins play a central role in regulating the activities of different immune cell types and represent some of the most promising targets for cancer immunotherapy. This eBook highlights some of the immune checkpoint molecules that are being investigated as immuno-oncology targets, and the products that we offer for studying these molecules.

Wall Poster: A Look Inside a Tumor

Inside the tumor microenvironment, many different cell types exist in this dynamic, complex space with many different factors at play. View the immune cells that attempt to target the tumor and the tumor-mediated mechanisms that allow it to suppress the immune system. Request your copy today.

Select from over 5000 R&D Systems proteins and we will deliver them to you in a 96-well plate. Save set up time by reducing manual pipetting and get to your experiment faster with R&D Systems Custom Protein Libaries.

If you can’t find the protein that you need on our website, contact us. From scratch protein development to customizing a protein from our catalog, our custom services team will create the protein that fits your experimental needs.